Back to all posts

Worlds Apart - The evolution of a song.. and a songwriter.. 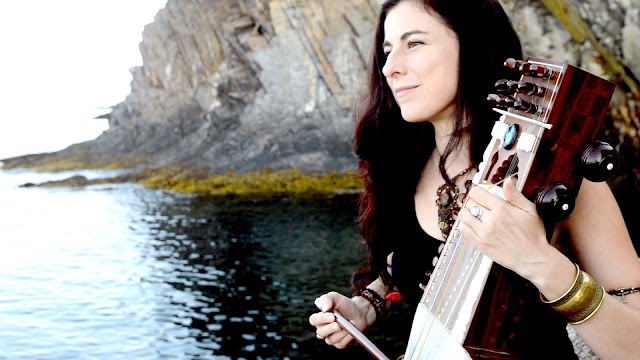 Suddenly, I am standing still and the international whirlwind that has been my life is distilling into musical expression. I knew it would. I am surprised it took so long. Last February I landed again in Mumbai, where the concept, the creative partner and the material for my next album started to emerge.. I've been working on an album that bridges the musical and cultural gaps that I often find myself in, one that expresses this journey towards wholeness. I suppose I had to first reach some level of understanding and personal alignment before it was possible. I am blessed that Ken Shorley, my long time collaborator joined me in Mumbai and has thrown his heart and brilliant mind into this work with me!

In 2006 I went to Mumbai with my professor Denise Nuttall to learn Indian music. She introduced me to Ustad Sultan Khan who first put a sarangi in my hands. Sabir Khan taught my first lessons and their dedicated musical family inspired me tremendously. What happened there has shaped my last 12 years in the most unexpected ways and has brought me many times to that amazing city. In India I strive for something that I have wanted since childhood, to learn Indian music. In Canada I have worked to deepen my songwriting and to continue my career as a performing musician. Ensembles have come and gone, I got a degree, tours happened.. and my refuge between the worlds has been a quiet room in Amsterdam where my musical mentor Joep Bor has given me space, guidance and perspective on all that was going on. As well as sarangi, Joep has been teaching me raga as it was taught to him by his teacher Dilip Chandra Vedi. It has changed my life and opened my mind.

It was in Amsterdam that I first wrote Worlds Apart. In that song I blended raga and songwriting. It was inspired by the families I grew up in, Afghan and English Canadian, by the cultures that separated us and the love that bonded us. It was also inspired by loving someone in another country regardless of vast misunderstandings, and it was a tribute to a beautiful friend who was killed in a way that defies reason entirely. Our minds separate us, our hearts bind us. I wanted to write it all in a song. I wanted to sing in Indian Raga supported by Western chords, I wrote it in Amsterdam and it was healing for me. I performed it quite a bit..

Here comes the head trip for me though... Now that I am recording this album, I want it to be the best it can possibly be. Studying music in India may sound romantic, but any student of classical music can tell you, it is a mountain of effort.. and you are generally at the bottom of that mountain.. for most, it is a long slow climb. A big part of learning a new language or culture or musical style is forgetting what you know, what you once held as truth. Luckily I have had guides on that level too.. Reading Krishnamurti’s lectures, meditation with Panda Chi, and Mooji satsangs have helped me to stay grounded in what is true, without interpretation, without desire, without manipulation. Music lessons with our beloved teacher Pandit Dhruba Ghosh helped too. He focused on deep listening, the kind that lets you hear not only your own accent, but your own assumptions and conditioning.. all that comes between you and the perfect tone.. sigh.. he is deeply loved and deeply missed.  He led me to a clarity of experience and freedom of expression that is not possible when there is any clutter in the mind. I needed them all, these great teachers of truth, to finally see that my song had not reached its potential. It was full of mental blocks, it was written before I had the skill or understanding to write the song that I wanted to write. I sang it publicly and some loved it, but I was always aware, if I was honest with myself, that the audience was only half with me.

I wanted the album we are making to be called Worlds Apart, because the song means so much to me. But I also felt that the song needed to be reworked. It had a Celtic style guitar and Indian tabla accompaniment, English lyrics and occasionally it broke into raga Alhaiya Bilaval. So Ken and I worked on it, we took out a verse to make it more concise, we shortened the intro, and then took it away entirely, we tried different speeds.. but still I felt something was not right.. so we took a break and walked through the lovely nature trails that surround our little A-frame studio here in Nova Scotia and lead eventually to an organic coffee shop. On that walk I asked Ken for his honest opinion. I told him about the nagging feeling I always had that the song did not land where I wanted it to, that it did not fully express my intentions.. and that I was thinking of cutting it from the album. Then he gave me the honest answer that I needed to hear. Ken first heard the song years ago and since then, has learned it and performed it with me. But he told me that the first time he heard it, he felt the struggle musically, like there was an abrupt change between the Western and the Indian styles. And I realized that yes, when I wrote it, my understanding of Raga was still very basic. I had not yet had the experience of Raga speaking through me, not as a learned series of notes and phrases, but as the teacher itself unveiling its own unique character, separate from the mind of the musician. I was still in a very western box, unable to compose in raga. I simply switched between two styles in one song and called that a blend. I realized in that little walk and honest discussion that in order to save the song from being cut entirely from the album, I had to start it again from the beginning.

In some way, the song has been a companion through this musical journey.. but it got stuck in a moment of time when I was still living two separate lives, East and West, unable to connect them, but so desperately wanting to. I had learned in early childhood to separate my behaviors and even my thought patterns to suit the situation and culture that I found myself in. My desire to write fusion music is connected to my desire for inner unity. I thought this song reflected that, but it was only in its first draft. I had not yet made the journey myself.

Since that conversation on the trail, I started again. I was able to let go of the composition and reconnect with the original intent, and Ken also had to forget his understanding of the song as it was. We cut both the guitar and the tabla. I switched ragas and changed the tune from Alhaiya Bilaval, a raga that corresponds to a Western major scale, to Raga Pilu, a mixed raga which uses a number of magical movements between what the West would call major and minor scales. In Pilu, I could express the sentiment more perfectly and let the whole song be inspired by the raga instead of switching in and out. And Ken made the most amazing accompaniment. He created a drone out of a synth patch, and made a set of electronic loops that use Indian rhythmic patterns, adding to the cultural mix a beautiful blend of past and present.

Now we both love the song again, and it will make it onto the album. Some deeper unity has been realized inside of me as a result of this process. It is a reminder of the danger of calling something finished, or known. As our perspectives develop, we can look at our work and ourselves and make the necessary adjustments to reflect our growth.. instead of sticking with something because that is the way we always did it.

These last twelve years have been a wild ride. Making this album allows me to settle in for a moment and catch up with myself. I am now able to see the Worlds Apart, without being the Worlds Apart. I am grateful for all that has led me here.